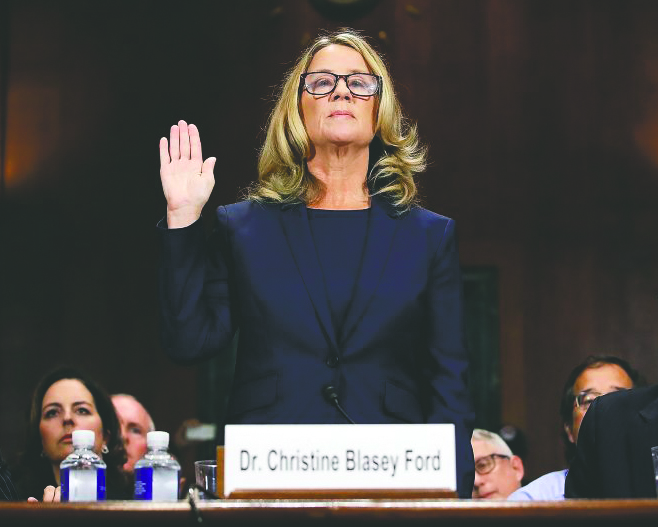 Women all over the world wept as Chief Justice John Roberts swore in Brett Kavanaugh as a U.S. Supreme Court justice Saturday, Oct. 6. After Dr. Christine Blasey Ford accused Kavanaugh of sexual assault, many believed it would prevent his swearing in. This was not the case.

In the days of the Kavanaugh trial, from Sept. 1 to Oct. 4, social media posts swirled with a common theme: that young men should be fearful of women ruining their lives with false accusations. These posts have inspired millions of women to share what they fear — fears women and girls face in everyday life.

Ask just about any women what they do in everyday life to prevent being assaulted in, and they will give a plethora of responses like those women shared on Facebook or Instagram:
Don’t take an Uber alone.
Be wary of the men in your life, especially if they are older.
Don’t walk alone at night.
Watch where you park, and check your backseat before you get in the car.
Invest in a home alarm system.
Never put your drink down, and make sure you see it being made.
Carry mace or pepper spray.
Own a big dog.

These are just some of the hundreds of preventative actions that females of all ages take in order to prevent being raped or assaulted.

Even still, rapists assault hundreds of thousands of people a year. In 2015, victims reported 431,837 rapes in the US, according to statista.com. This number in no way takes into account the unreported assaults, which was estimated to be 211,200 every year between 2006 and 2011, according to www.statista.com.

So when a debacle like the Kavanaugh trial surfaces, some are quick to assume that victims step forward with false accusations in order to retaliate against men they dislike. Some also assume that accusers speak out simply to gain fame. Take the Bill Cosby case, for example. Can anyone name 10 of the 55 accusers? Five? Even one? To make these assumptions about victims is the epitome of ignorance.

Statistically speaking, only 8 percent of reported rapes are false accusations, according to nsvrc.org. But accusations are reported as false if the case is dismissed due to delayed reporting, insufficient evidence, inconsistencies in victims’ statements or uncooperative victims. So truthfully, “false accusers” are even more rare than that already-slim 8 percent. Authorities only labeled these cases as such because prosecution ceases or the case is dropped.

As for assaults going unreported, there are as many reasons to stay quiet as there are preventative measures mentioned earlier. Many victims feel afraid of being publicly mistreated. Take the events surrounding a rape at Dartmouth College in 2017, for example. An 18-year-old girl had been raped by a man who entered her room while she was sleeping. After she admitted to drinking alcohol and having overnight guests that day, police carried out a “fierce and skeptical” cross-examination, according to the Human Rights Watch (HRW). The trial resulted in a not-guilty verdict, and the attacker finished his college degree that year. The victim and her friends said in a report to HRW that they learned a hard lesson: “Stay silent, or be victimized further.”

Many victims stay quiet to prevent shattering familial relationships. According to RAINN (Rape, Abuse and Incest National Network), 25 percent of rapes are committed by intimate partners or family members. For many victims the idea of facing judgement or ruining these relationships often seems like too much to bear.

Many survivors deny what happened to them because they believe that the actions taken against them weren’t actually abusive. This can even be seen in high school culture — So that girl groped you at that party? She laughed it off, why couldn’t you? Or your friend’s boyfriend always makes rape jokes? But he couldn’t rape her. After all, he loves her, right? So it’s not really rape.

Many victims claim they can’t fully remember their assaults; there’s more than one scientific explanation for this. Many date-rape drugs include memory loss as a side effect. Likely the most well known date rape drug, Rohypnol, causes this, as does Gamma Hydroxybutyrate, better known as GHB.

Psychological memory loss is also plausible, according to the International Society fo Traumatic Stress Studies. An event called psychological shock can be a main reason for blacking-out a distressing event. This is the brain’s way of surviving — focusing on soley what is happening in the moment and blocking out anything that is irrelevant to immediate survival. And even if a victim can remember an assault, speaking about it can trigger severe side effects of post-traumatic stress disorder.

However, many argue that media blows assaults like these out of proportion. While this can be the case sometimes, media is really no help to victims and abusers alike, and can be quick hold assault to a double standard. In 2012, high school student Candice Sortino rushed the field of a college series game and ran around groping as many players as possible. Media portrayed her as quirky, flirty and downright fun. However, if a man had tried this at a women’s volleyball game he would had been quickly labeled as a pervert or an animal— and rightly so. Sortino, age 17, should have been labelled as such.

As I finish this article, I remember how a group of teenage guys catcalled and whistled as I stepped out of my car at Clarkston High School just last week. I brushed it off, because that is what society has taught me to do. Why is that bad? He was giving you a compliment. This is a common response to my discomfort. In truth, I have to act like it was a compliment because I fear what might happen to me should I fire back with an angry or defensive comment. This is a fear every woman lives with every day of their lives in every part of the world.

As for all the men and boys saying they feel scared to even touch a woman in this #MeToo era? Good. Didn’t your parents teach you to keep your hands to yourself? To not touch what isn’t yours?