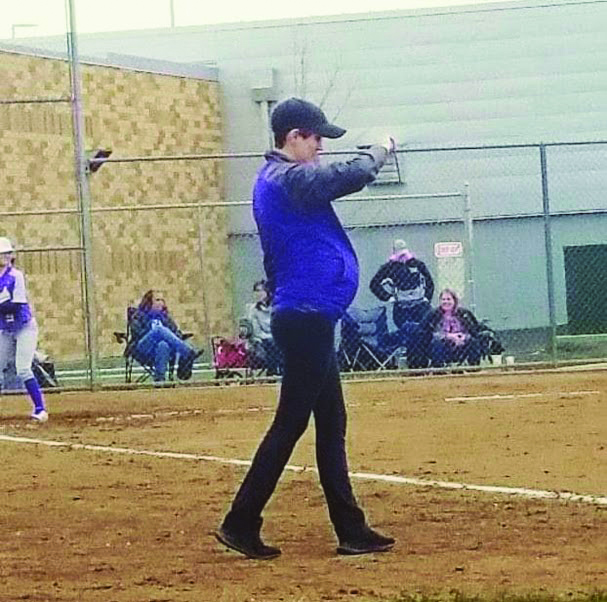 About 24 hours before she was holding her baby girl in her arms, Delp began to have contractions. She was in the beginning of labor when she coached a double-header against Post Falls in Lewiston.

“[The contractions] weren’t anywhere near close enough to go to the hospital. They were just uncomfortable, so I decided to go to the softball game [at LHS],” Delp said.  “I think it was better for me to be on the field coaching, to keep myself distracted from the discomfort, instead of just sitting at home stressing out about it.”

When Delp began to have contractions, she said she didn’t really think that she was in labor because it was a week before the due date. After staying up all night on Friday (due to discomfort from the contractions), she got in her car and drove from her house in Pomeroy to Lewiston, initially to drop off keys and her softball book. She later decided to stay and coach for both games on Saturday morning.

“I knew if I went to the game, I wasn’t going to have the baby right then and there because I felt fine, just uncomfortable,” she said. “I didn’t believe that I was going to have the baby that night. So I stayed for both games and went straight to the hospital after [the softball games] ended. That’s where things started to get real.”

“Once we got to the hospital the contractions became more and more frequent and painful, but once I got the epidural,

“I actually fell asleep for a while and then we had a baby,” she said.

After having Kenni, Delp took two weeks off from coaching, since because most of the varsity team’s games were out of town. She won’t be back to teaching until the fall.

“It was nice to take a break, I mean there was no way I was going to travel to like Coeur d’ Alene with a newborn,” Delp said. “My husband was on paternity leave during that time too, so we just were getting use to our new lives as parents.”

It’s been a month since Delp was timing her contractions at the softball game and having Kenni, and so far motherhood has been a dream.

“Things have been really great, in a way, it’s exactly what I expected and nothing what I expected at the same time. I knew I always wanted to be, and planned on being a mother so it’s fun to be able to experience it for the first time.”