Brazilian president’s reputation up in flames 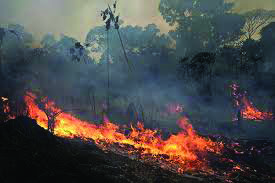 Imagine a family is having a party in their backyard. They decide that as it gets later in the night that they would like to have a fire to roast marshmallows. The fire is slowly but surely ignited, getting bigger as it gets going. But nobody is expecting it to grow dangerously large, as it is inside a fire pit.

The family starts roasting their marshmallows, not fully aware of the fact that the fire is a little larger than it should be. But nothing has happened yet; it’s no cause for concern. They are just trying to do what they had originally planned. Before long, one of the kids accidentally knocks over the fire pit and the dry ground outside catches fire and begins quickly spreading.

Nobody is prepared for this emergency, as in the past this was not something they had really had to deal with. Running inside, everyone but the father goes to retrieve water and call the fire department. When the family gets back, the fire has spread through the entire yard. The fire department can’t show up for another half hour, but news vans begin showing up almost immediately.

In this time the entire house burns down and the surrounding houses have also caught on fire. While everyone is asking for help the father of the first house is refusing help from everyone outside of his own family. He’s blaming everyone else for the destruction in the neighborhood.

This story may sound ridiculous, but it’s very similarly to the recent actions of Jair Bolsonaro.

Since the Aug. 10 beginning of the ongoing Amazon Rainforest fires, Brazilian president Bolsonaro has brought a bad image upon himself while the world watches these devastating fires unfold.

He has downplayed the severity of the damage created by the fires on many accounts. The president has resorted to claiming that the fires were started by NGOs, non-governmental organizations, to deflect the criticism. According to The Washington Post, at no point has he tried to stop the fires, especially not in any way that did not provide him good publicity.

Bolsonaro has cut environmental funds by 24% since he took office Jan. 1, 2018. This year Brazil has seen 72,000 fires; an 84% increase from last year, according to Business Insider. Bolsonaro has claimed that the increase comes from the previously accused NGOs that have lost funding from the Brazilian government. According to The Guardian, the president has shown no proof that this is true, but seems to need a way to deflect all blame for these emergencies.

On top of his issues of deflection, he has also denied assistance offered from other countries. When the French president, Emmanuel Macron, offered the Brazilian government $22 million, Bolsonaro immaturely responded that he would only accept the donation if Macron apologized for his previous personal insults to Bolsonaro. Macron’s insulting remarks had nothing to do with the fires, but only Bolsonaro’s political ideals.

Bolsonaro also made claims, according to The Washington Post, that he cannot accept aid from a president that supposedly made attacks on the Amazon. He claimed Macron used the G7, a conference of political leaders around the world, as a ‘disguise’. This can be found as untrue, as Macron has attempted to help as much as possible since the beginning of the fires. He has been met with nothing but disrespectful and tactless responses from Bolsonaro himself.

Following his rejection of French assistance, Bolsonaro pivoted and said Aug. 20 that he would accept France’s assistance if Brazil alone got to choose how to spend the money. This brought up worries such as his competency to control an emergency situation and worries about his morals and priorities in leadership. Who wouldn’t worry about money, considering that Bolsonaro hasn’t done much to end the crisis?

Instead he has tried to make others look bad in the wake of destruction. The whole time Bolsonaro was rejecting France’s assistance, he was accepting offers from American president, Donald Trump, whom he is already close friends with.

Bolsonaro’s refusal of French aid contradicts his reasoning for he accepting Trump’s assistance. Since Bolsonaro began rejecting outside help, The New York Post reports, Trump has supported him and praised the way he has handling the situation. As a response, Bolsonaro has thanked and praised Trump for his positive impact on the Brazilian economy and on his own personal image.

Bolsonaro has very blatantly shown that he cares more about his image than his country’s safety and preservation. His sole acceptance of assistance was due to the fact that Trump personally defended him. Even in his own country Bolsonaro was not even being defended. So this looks bad for him, looking for an ego boost rather than looking for help for his country’s struggling economy and ecosystem. This is only worsened by his unwillingness to accept crucial help based on a personal rift with Macron.

During this state of crisis in the Brazilian government and environment, Bolsonaro has responded in an unprofessional and immature ways. The fires could have had much more resistance earlier on, causing less damage.

Anyone with interest in finding ways to help the situation can start with www.rainforest-alliance.org or donate.rainforesttrust.org.