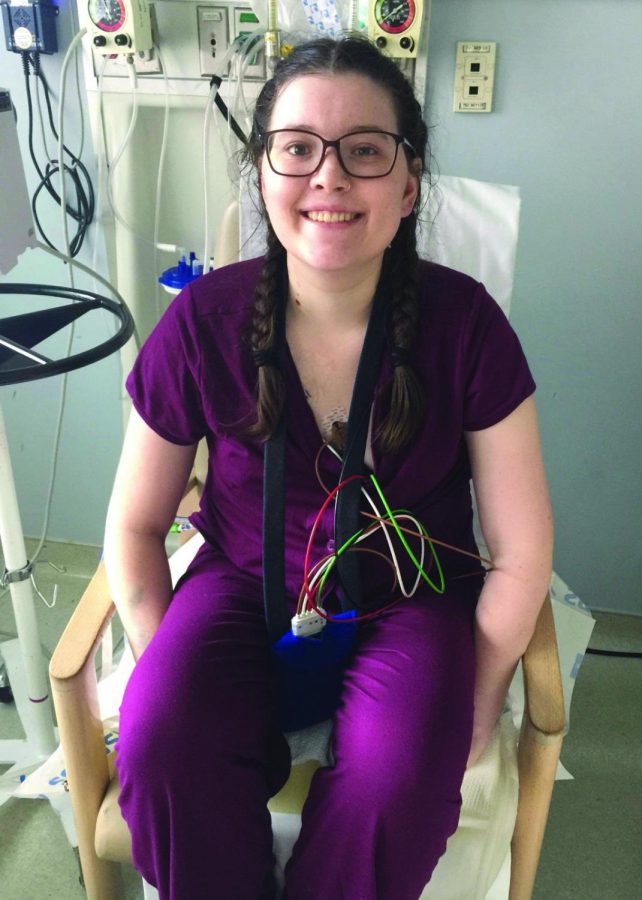 Erika Pepper sits in her hospital room after months of recovery from a lung transplant.

Congratulations to Skylar Raymond! This story won an Honorable Mention for Profile Writing from Quill and Scroll for its 2020 Writing, Photo and Multimedia Contest. — Charity Egland, adviser

Erika Pepper, a former Lewiston High School student who graduated in 2013, has battled cystic fibrosis since she was born. But she recently received a lung transplant after years living with the disease.

Pepper was one of the first babies in the Northwest to receive a CF diagnosis in the womb. It happened because of a fluke when doctors saw something abnormal during a routine ultrasound and ended up doing further testing, she said.

“I never thought of myself as the ‘sick kid’ because that’s just the way I was born,” Pepper said. “It didn’t really affect my everyday life, except for the treatments I did to help my lungs.”

Pepper lived a normal childhood in Lewiston and was a very good student. Although she was battling a disease, not many people at school knew that she was even sick.

“I had a really great support group with my family and close friends, but around people at school I didn’t usually bring it up because I didn’t want people to treat me any differently,” Pepper said.

According to the Cystic Fibrosis Foundation, CF is a genetic disease that causes persistent lung infections and limits the ability to breathe over time. This means that even the common cold can be dangerous for a CF patient because it goes straight to the lungs.

During her senior year of high school, Pepper got very sick and ended up being out of school for an entire month.

“There was talk for a while that I may not even be able to graduate,” Pepper said. “That, to me, was devastating because I was a good student and this wasn’t something I could control.”

With the help of all her teachers and the administrative staff at LHS, Pepper was able to walk at graduation and get her diploma. Her friends and family were there in support.

“My teachers and [the administrators] were very helpful during this process. They made sure that I would get that diploma and get to go to college,” Pepper said.

She lived a relatively normal life up until she turned 18. That’s when she moved out on her own, and when respiratory therapy and inhaled treatments started to take over her time in college.

“I just wanted to be independent. I took care of myself all by myself for the first time in my life,” Pepper said.

She studied at Lewis-Clark State College for elementary education. After graduating college, Pepper moved to Seattle to teach first grade. This is when her lung function percentage began to decrease rapidly.

“The normal person’s lung function can be anywhere from 90-106% based on how much you can breathe out, and by this time I was at about 50. I ended up getting the flu one day and was the sickest I had ever been,” Pepper said.

After being in the hospital in Seattle, her doctors moved her home to Lewiston, where she could be closer to the doctors who worked with her CF in Spokane. She began treatments that were more frequent and more rigorous, but her lung function kept dropping.

“It just kept getting worse and worse to the point where my lung function was now in the 30s and I needed to start being on an oxygen tank 24/7,” Pepper said. “I went from having this invisible illness to now carrying a huge oxygen tank with me at all times. People obviously knew I was sick. ”

After months of oxygen and IV treatments, Pepper still kept her hope to recover.

“I just always said to myself, ‘One more treatment and this could be the one.’ But after finishing teaching the school year in Seattle, my doctors told me I couldn’t teach anymore because I was so prone to infection.”

The year 2018 was full of changes and illness for Pepper and she said she felt “dead-sick to the world” because she couldn’t even walk up stairs or go grocery shopping.

“My now-husband was so supportive during this process because we have been together since I was 18,” Pepper said. “He saw me go from this somewhat healthy girl to becoming very sick, and he had to take care of me.”

Pepper had never imagined needing an organ donor, but when her lung function dropped into the 30s, doctors began to talk to her about options.

“I saw my doctor and he said, ‘I think it’s time we have a talk about the donor list because you are not getting better’,” Pepper said. “I sat there in absolute shock because I never thought I would get to that point.”

After an evaluation process with rigorous testing Pepper met with a transplant team in Seattle.

“The evaluation process was a week from hell. I had tubes down my throat, needles poked in my heart, scans done and multiple blood labs,” she said. “I wouldn’t wish it on anyone. It is not a fun process at all. I was absolutely miserable.”

After all of the tests were processed and reviewed, they went to the United Network of Organ Sharing (UNOS). She expected to wait months before she could get her name on the donor list. But it only took one month.

The next step was to wait for an available transplant.

“Once you’re on the list you can expect that call at any time. It’s like you are getting ready to have a baby because you need to have a hospital bag ready and to be prepared for that call.”

Pepper expected to wait for months, if not years.

But after being on the list for just 18 hours, Pepper got the call.

“I answered the phone at around 10 p.m. and I just paced around my house and slowly grabbed all of my things. I called my mom and my husband and they came home and we just waited for the next call to start driving,” Pepper said.

When UNOS gets a donor for lungs, the donor could living or deceased. The person receiving the lungs doesn’t know much about the donor, Pepper said. Then they do all of the testing and sizing to see who the lungs can go to. A patient has to have a perfect fit for the new lungs, and they must be in a healthy condition. When these lungs became available, testing found that Pepper was the only person (out of three patients) who the lungs would fit.

Pepper and her family drove to Seattle for her surgery May 25, 2019.

That day Pepper had all of her family to support her and calm her nerves. But as they were prepping her for surgery, anxiety overtook her.

“There’s a chunk of the whole process that I do not remember,” Pepper said. “I started hyperventilating and saying I wasn’t able to do it. Finally after my mom calmed me down I was like, ‘OK, I’m ready to be knocked out now’.”

After the surgery, Pepper woke up with her family by her side. Doctors woke her in small spurts because so many things happen within the body after a transplant.

“When I woke up I had a tube down my throat to help me breathe and my arms were tied down so I wouldn’t rip [the tubes] out when I woke up,” she said. “The first thing I remember was how uncomfortable and agitating the tube felt, and I wanted it out.”

“I couldn’t talk because of the breathing tube so they gave me a whiteboard and first I wrote ‘breathe.’ Everyone started crying because they were like, ‘Wow, this is so beautiful! Yes, you can breathe now!’ And I was like, ‘No, get this tube out of me. I can’t breathe!’”

Weeks after the breathing tube was out and her body was healing, Pepper was able to leave the hospital. But she couldn’t go home to Lewiston while she was still recovering, so she rented an apartment in Seattle for a few months.

Now that she has a new pair of lungs and is in the perfect condition of health, Pepper’s life feels like “complete perfection,” she said. Although she is able to work, teaching elementary students will not be an option because she is still prone to infections. Pepper takes her dog on walks every day and hopes to become an online English teacher for children coming to America.

“Whenever someone asks me, ‘What are you going to do now that you have new lungs?’ [they] always expect some profound answer like, ‘Climb Mt. Everest.’ But I’m just living. I’m just doing what I love to do, that I can [do] now, and I really value that,” Pepper said.

For updates on Pepper’s progress, or to donate to help with her medical bills, follow Erika Pepper’s New Lungs on Facebook.