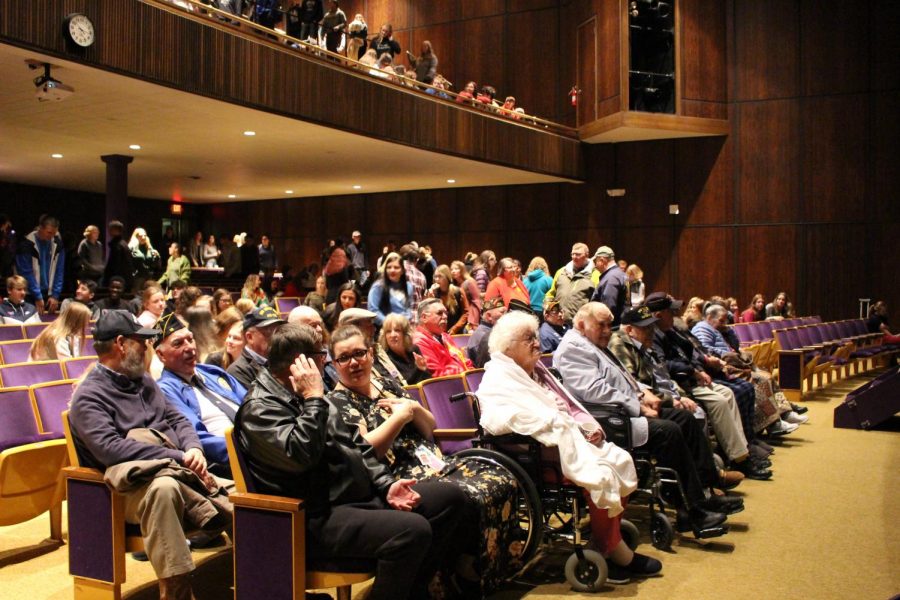 On Thursday, Nov. 7, Lewiston High School welcomed several visiting veterans at its annual Veterans Day assembly. Veterans Day is to honor all those who have made sacrifices for the country, according to defense.gov.

Harrison Smith, ASB president, started off the assembly by acknowledging and thanking all of the veterans who spoke with LHS leadership students during their visit. Smith named off all the veterans who joined the assembly, followed by speeches from veterans Doug Welch and Dan Byer.

Welch, who is now retired, graduated from LHS in 1972. He went into the Navy and served for 42 years before he retired only four years ago. Welch said that every veteran has unique stories, and he encouraged people to ask to hear stories. He explained that many Americans have family members who might have served, since about 7.6 percent of the population has served, according to ncsl.org. Welch said that students should ask those veteran family members about stories of when they served.

Welch also spoke about the 70-100 local events for veterans, such as the annual Veterans Day Parade in Lewiston, and the annual project to make Christmas packages for low-income families. He encouraged students to join the veterans in these local events.

Byer has been retired for 25 years and served in the Army. He also was an officer for a Corp Vet Club in Florida before moving back to Idaho three years ago. Byer said he wants people to support and visit veterans, and he encouraged high school students at LHS to look into enrolling with the Reserve Officers’ Training Corps (ROTC). He also explained some military benefits available, such as the GI Bill, which helps military members to get an education, and medical benefits as well. According to vfw.org, there’s also veteran benefits such as exclusive insurance programs, financial and medical services and many retail discounts.