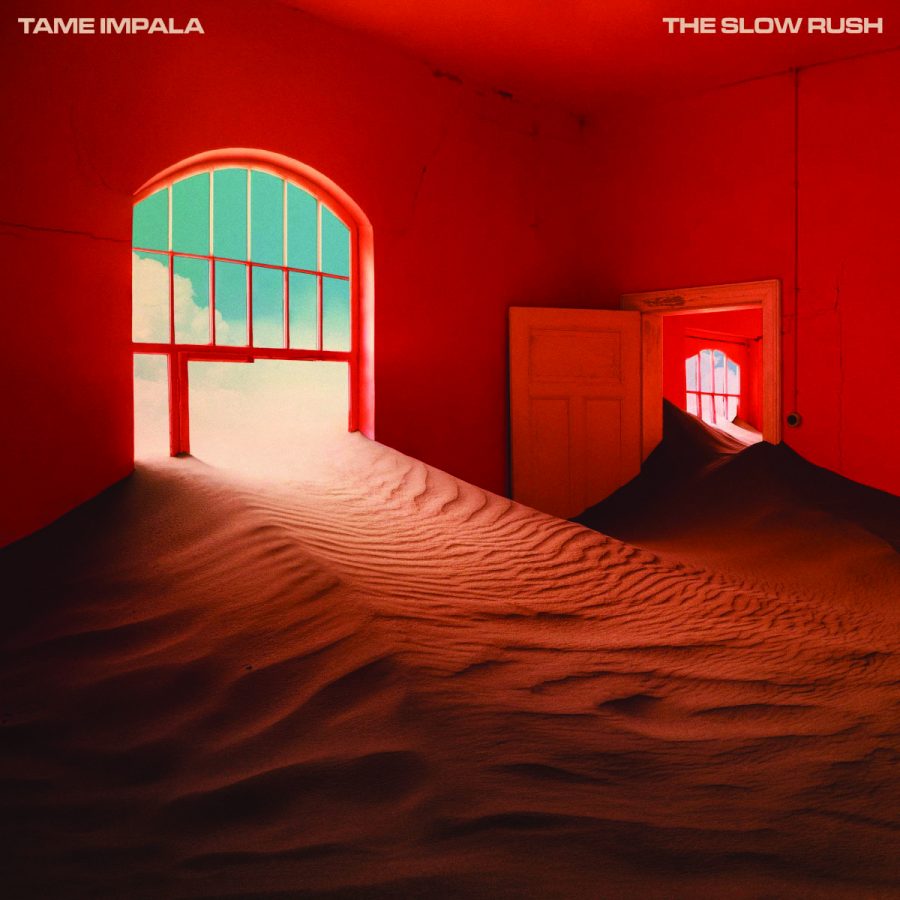 Released Valentines Day, The Slow Rush is the fourth studio album by Australian artist Tame Impala. This release follows the highly successful album, Currents, from 2015. Inspired by ‘70s rock and disco, Tame Impala creates the sequel five years later.
Falling into the alternative or indie genre, this album highly utilizes synths and distorted instruments to create a warped, psychedelic feel. As the sole producer, writer and singer on this album, Tame Impala  makes for an impressive one-man-band.
The opening track, “One More Year,” essentially sets the tone and theme for the rest of the album. With the signature reverb and dreamy vocals, Tame Impala preaches on making the most of our time and to not procrastinate.
Fan-favorite “Borderline” is the third track and is the most “pop” song on the album. Although it’s new and updated, it still provides a nostalgic feel. It’s not trying to mimic older music and styles. It holds a unique sound that stands on its own.   “Posthumous Forgiveness” is sorrowful and mournful in meaning as well as in sound. In the track, he addresses his late father and forgives him for his premature death. In a confused rage, Impala desperately asks his father questions, searching for answers on why he left him so soon. In the second part of the song, he mellows out to tell his father all the things he wished he could have shared with him.
Track six, “Tomorrow’s Dust,” elaborates on the major theme of the album: time. Tame Impala speaks on the pointlessness of looking to the past and regretting today’s decisions, as they will only become “tomorrow’s dust.”
“On Track” is one of the more optimistic songs, talking about overcoming setbacks and persevering to achieve goals. In the chorus, Tame Impala sings, “I lost a wheel a while back. But strictly speaking, I’m still on track.” As the song continues, it builds upon itself with various drums and synths.
“Lost in Yesterday” details nostalgia and how all bad memories one day turn into fond ones. Tame Impala sings about not dwelling on the past or how to change it. But on the other hand, he warns of over-romanticizing the past as well.
“Is It True” differs from the rest of the album with its jolty beat and a more robotic tone. Towards the end of the song, Tame Impala incorporates bongos and adds fragmented instrumentals, creating a tropical feel.
A poster child for the album, “It Might Be Time,” best showcases the sound and direction Tame Impala is moving in musically. This song is chaotic and unpredictable in all the best ways. Its odd structure is very telling stylistically, and uses arguably the most unusual arrangement of sirens, pitched pianos, synths, drums and basses.
The second to last track “Glimmer” opens with a recording from a podcast which quickly breaks into the main instrumental track. Between synths and indistinguishable whispers, the line “I just want a glimmer of hope” is repeated six times. While easily being the most straightforward song, it’s also the shortest, being only 2 minutes and 9 seconds.
Closing out the album is “One More Year.” Starting out with a jazz piano, the song builds into a set of heavy-hitting guitars and drums. Although for some of the song they cut out, the piano line remains and only changes pitch and tone throughout the song. The lyrics, best put by Impala himself, he tells Apple Music, “The time has come. Nothing left to prepare. Nothing left to worry about. […] My future comes to me in flashes, but it no longer scares me. As long as I remember what I value the most.”
Equally euphoric and nostalgic, Tame Impala provokes a feeling unique to his music. It’s an entire experience on its own. Something to appreciate about this album is that it’s not merely a collection of songs but rather a body of work that’s connected and interlocked, creating a storyline and message. There are many layers to peel back, each one as intriguing as the next.
Tame Impala creates a body of work that is unique and progressive. For these reasons, The Slow Rush gets a 9/10.