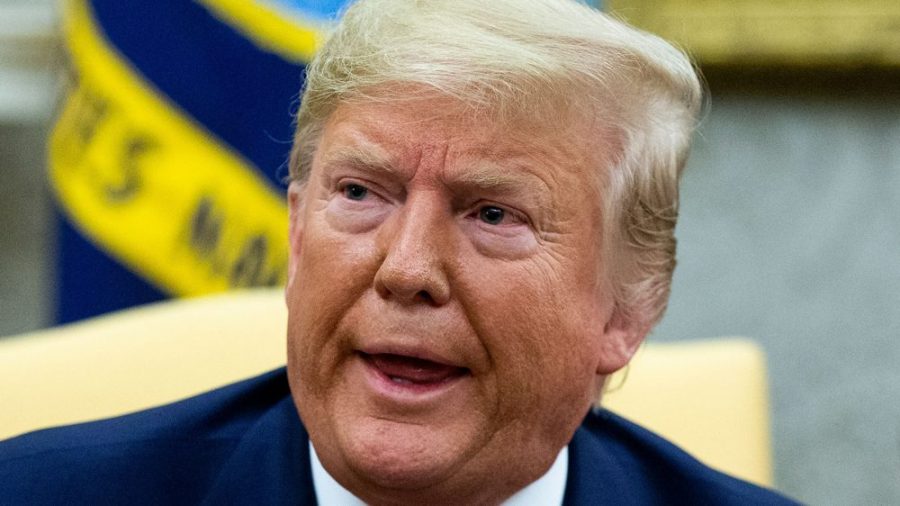 Donald Trump being caught in a very photogenic moment.

Sexiest man. Two very big words. Donald Trump, 45th president of the United States, has been named “Sexiest Man Alive” by People Magazine. A lot of controversy has sprouted from this decision, but he totally deserves it, and here’s why.
His looks are the main reason for the award. His beautiful sun-kissed orange skin gives off the illusion he just came back from the beach. Trump’s hair is also ideal; the corn silk texture adds to the appeal. The fact that there is no difference between his lips and eyes is also attractive.
The title isn’t all shallow, though, and also includes personality. Trump is by far the kindest person and is very generous with his $3.1 billion, as all billionaires are. He is also extremely respectful and has never made a racist or misogynistic comment in his life. He’s treated all his ex-wives and females in general with the utmost care and has never wronged them. No one respects them more, as he says.
He is also incredibly eloquent and can showcase that talent with his many tweets throughout the day. An example of one from 2012 says, “It’s freezing and snowing in New York–we need global warming!” and another from 2013, “Sorry losers and haters, but my I.Q. is one of the highest — and you all know it! Please don’t feel so stupid or insecure; it’s not your fault.” These tweets also show his maturity and how well it’s developed for about 73 years.
Trump also takes responsibility for all of his mistakes, and never blames anything on opposing political parties or people close to him. He’s also known to be very kind to people on social media platforms. He has solid morals, and would never try to capitalize off of a pandemic that is scaring a lot of people. The way he treats immigrants is also equitable, as well as his “zero-tolerance” policies that show so much compassion for people not born in the United States.
He’s also made quite the name for himself, and worked hard to earn his money. Trump turned a “small” loan of $140 million from his dad into a successful company. His company has only declared bankruptcy six times. How impressive. He is even overly intelligent, but his ideas are so very reasonable that they don’t raise questions in any sensible person’s mind.
Trump deserves this. He’s making People Magazine great again.