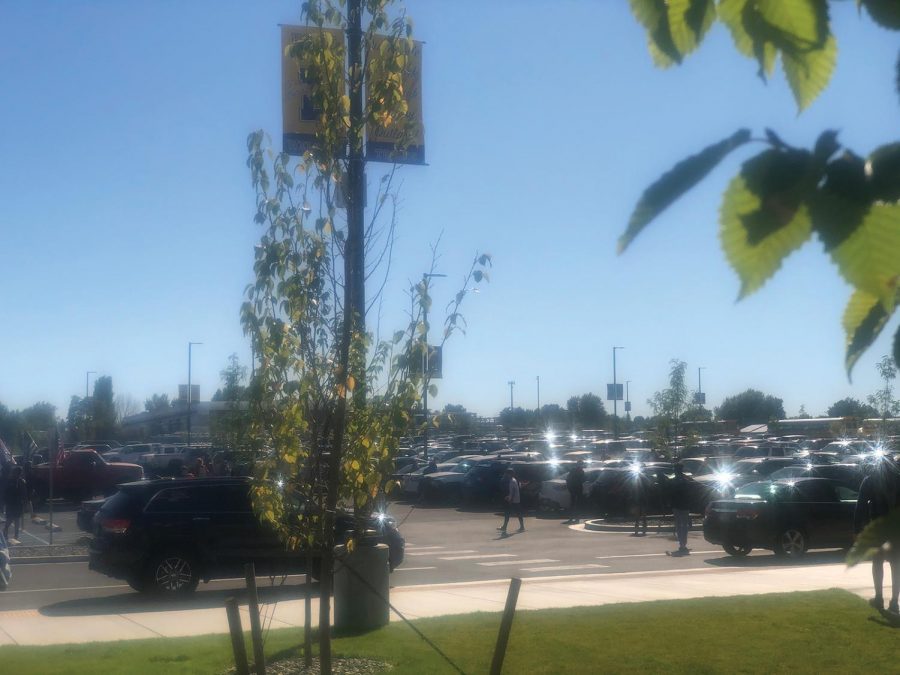 A packed parking lot floods with students from LHS after school. Photo by Chayton Brewer-Burgin

This fall, the parking situation at the new LHS campus has been a nightmare. Anyone who is not among the first 20 kids to get out to the parking lot after school has to be prepared to sit.

The school could correct this by possibly adding an early class release, such as how they do with lunch. Students with first lunch could leave first, while students with second lunch could leave five minutes later. Or instead, students could be released from class based on which wing or building they are in. This would make for less traffic for people who are trying to leave as soon as the bell rings.

Students could also learn to adopt the Zipper Effect strategy that is used in car pile-ups. The whole idea is to allow one person into the line, then move on. Then that person allows someone into the line, and so on. If every student could learn this method, then it would allow everyone to clear out of the parking lot much faster. As it is, everyone is trying to be the “first one” out of the school.

Two students who gave their opinions on this were Lee Hendren and Cecelia Thomas. They agreed that the school made a huge error in making the student parking lot so small. Hendren also recommended using the Zipper Effect.

“If everyone took part in this, then people could get out without having to fight each other,” he said.
But Hendren added that, for the Zipper Effect to work, everyone has to be on board, or people’s stubbornness will get in the way.
Thomas expressed her frustrations on the matter.
”People will just allow a bunch of cars to go by, holding up the line behind them,” she said, ”When they do decide to go, they end up blocking another line of traffic by sitting halfway in the [lane] and halfway in the main flow of traffic. It makes me very irritated and upset.”

The challenge of the Zipper Effect is that it a make-or-break strategy. If students choose to use this method, then the majority of students have to be on board with it. Officer Rob Massey, the LHS student resource officer, said that he likes and agrees with the idea of the Zipper Effect, but voiced that it would require everyone to comply with the rule.
Massey also mentioned that the school office staff members are trying to have parents leave the parking lots through the main exit, while the students head toward Warner Avenue or Community Drive.

“This way, it would prevent students and parents from piling up, trying to go through only one exit,” Massey said.
He also mentioned that if students are planning on waiting for the traffic to die down, they should meet with teachers during that time after school.

“If [they’re] going to have to stay after and wait for the parking lot to clear, then why wouldn’t students just meet with teachers so they can get some extra help or get caught up on homework?” Massey said.

He also stated that school staff members want students to back in or pull forward into their parking stalls. As long as students can pull out of their parking stalls, it makes traffic flow much more manageable rather than drivers waiting for each other to back out of each stall, he said.