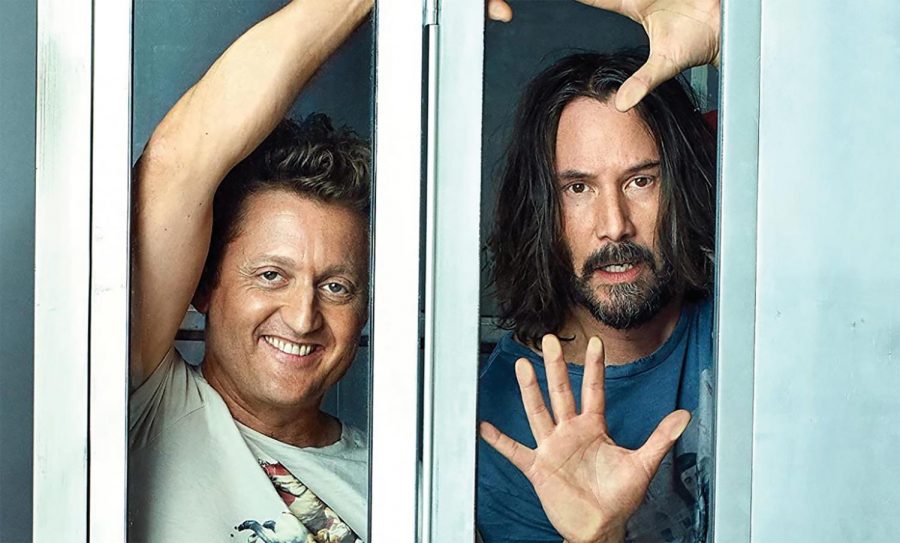 Winter and Reeves reprise their roles as Bill and Ted.

To start off, viewers WILL NOT understand this film if they have not seen the first two films. Bill and Ted Face the Music is a continuation of Excellent Adventure and Bogus Journey. It picks up roughly 30 years after the second film, taking place in the present day. Bill (Alex Winter) and Ted (Keanu Reeves) are now full-grown adults, married to the princesses (Erinn Hayes and Jayma Mays), and each has a grown daughter. Bill’s daughter is Thea (Samara Weaving) and Ted’s daughter is Billie (Brigette Lundy-Paine).

Though the second film ended with their band, the Wyld Stallyns (pronounced like “wild stallions”), becoming the top rockers in the world, that’s not the case anymore. They’ve lost the limelight, and seemingly, they have lost the ability to play good music. Meanwhile, Death (William Sadler), who once shredded the bass guitar for the Stallyns, has left the band.

This is their situation when an emissary from the future finds them. Kelly (Kristen Schaal), the daughter of Rufus from the first two films (George Carlin), takes them to the future to meet with the leaders of San Dimas. Bill and Ted are informed that they have to compose a song to save the world. So they do the reasonable thing and use a time machine to travel to meet their future selves, who they assume have already written the song.

Meanwhile, Billie and Thea hear of their fathers’ troubles and concoct their own musical plan to assist them. Hilarity ensues between the two subplots, as both parties travel to various parts of time, while also being chased by a constantly distraught robot (Anthony Carrigan) who is always in need of validation.

The plot moves very quickly, as the film is only an hour and a half long, but it doesn’t feel too rushed. Reeves and Winter perform wonderfully in reprising their roles, and though they may look 30 years older, their dumb, optimistic personalities haven’t aged a day. The story may take them and their characters to various futures, but it takes the audience back in time and revisits a lot of the old gags from the first two films. Face the Music also adds new, hilarious material that embodies the spirit of the first two films that says, “Be excellent to each other…and party on, dudes!” Overall, Bill And Ted Face The Music earns 3/5.