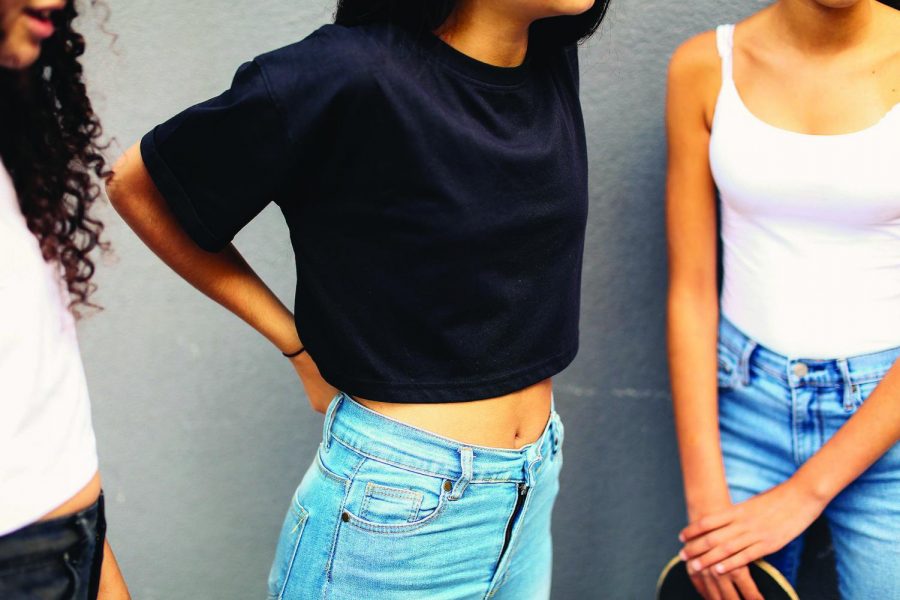 Teenage girls chat with each other while wearing crop tops considered too revealing for school. Photo courtesy of Getty Images.

In a school year amidst a pandemic, political unrest and an endless list of unfortunate events, one topic has LHS students talking: dress code.

Along with a brand new facility, the 2020 school year has brought LHS a new assistant principal, Jolyn Hobson. A 2007 Bengal alum, Hobson brings a fresh, female perspective to the male-dominated LHS administration.

Numerous students expressed concern during the first weeks of school regarding the number of students being dress-coded, along with the reasons for which they were dress-coded. From what students could see, “with the addition of Mrs. Hobson to LHS staff, there has been a noticeable rise in the enforcement of the dress code policy,” said Lily Van Mullem, a junior.

On Sept. 2, an online petition was created with the title “Get Mrs. Hobson to stop harassing girls and their clothing” [sic]. Quickly, it gained over 600 signatures and the attention of students, school staff, parents and the community. Various social media posts called for a peaceful protest known as “Crop-top Thursday,” where students, mainly boys, would wear cropped shirts to signify their support for the petition. That day, many students participated, and many were dress-coded and asked to cover up or change. Although there was no change to the dress code as a result of the protest, it did start a conversation about the enforcement and purpose of the LHS dress code.

In a Bengal’s Purr interview this fall, Hobson shared her stance on dress code enforcement and what that means for LHS students.

“You’re a Bengal, and you’re a representative of this school and our community, and so I’m going to hold you to a high standard,” Hobson said. “If that means enforcing the rules and saying, ‘Hey, you can’t wear crop tops to school,’ then that’s what I’m going to do.”

Hobson’s priority, she said, is to ensure that students are dressing in a manner that is professional and appropriate for the school or work environment. She bases her judgment on the rules and guidelines set by the school board.

The dress code policy for LHS, which is found on page 23, section 6, in the student handbook, reads:
“Exposed undergarments and midriffs are not acceptable. Buttocks, upper thigh and chest, and midriff must be covered when walking; sitting, and bending or reaching (applies to males and females alike). Clothing that refers to gangs, drugs, alcohol/tobacco, sex, violence or that contains innuendoes referring to obscene behavior shall not be permitted.”

Hobson said she also recognizes that as a new staff member whose job is to enforce rules, she will inevitably be met with resistance.

Many student complaints refer to the imbalance of girls over boys being dress-coded. Many male students have been seen on campus wearing clothing with logos or references to drugs and alcohol, along with profanity and nudity. To many students, it seems that while these male students go unnoticed, girls get plucked from the hallways for showing the slightest bit of skin.

This is not an LHS isolated issue, rather a national one concerning the sexualization of teen girls and their clothing and bodies. In 2019, Autumn Tolbert from the Arkansas Times wrote, “Girls are too often treated as temptresses who must have their clothing choices closely monitored to prevent them from distracting the boys from their schoolwork. They are sirens, existing to wreak havoc on the poor male students.”

It’s not just girls’ bodies that could be potential distractions; Tolbert also adds, “You know what is distracting? Construction noise nearby, being hungry in class, a stray dog wandering into the classroom, or another student continuously talking. Those are distractions. A girl’s clothes and her body are not.”

Meanwhile, on the new LHS campus, construction workers have been heard on the roof and outside school buildings throughout this Fall.

Among the concerned students, some have been much more vocal than others.

Lily Van Mullem is a junior at LHS who was dress coded in September.

“Many girls that attend LHS have voiced to me that they feel uncomfortable, ashamed, or even harassed when they are dress coded,” Van Mullem said in a written exchange with the Purr. “[. . .] They are in an environment that allows the calling out and judgment of their clothing. I believe that when the dress code is only enforced upon girls and not boys, it is discriminatory. I believe that constant attention to a young girl’s appearance, especially from someone in a position of authority, can be incredibly damaging.”

Van Mullem added that in future years for LHS, she hopes administrators will recognize and question this imbalance.

“I hope that the admin recognizes the imbalance between girls and boys being dress coded and asks themselves why that imbalance is there,” Van Mullem shared. “I hope that admin questions why so many students are frustrated [. . .] I hope change is made to the policy to contain equitable, inclusive, and body-positive language.”

Hobson had words that she hoped would reassure students.

“Your value as a person doesn’t come from the style of clothes that you wear,” she said. “Your value comes from how you treat people and how you value the people in your life and the relationships you have in your life.”

Hobson confirmed that she doesn’t hold grudges against students who she dress codes.

“Everyone is human and bound to make mistakes,” Hobson said. “People are of utmost importance to me [. . .] so even if I have dress-coded [students], if I see them, I say hi to them.”