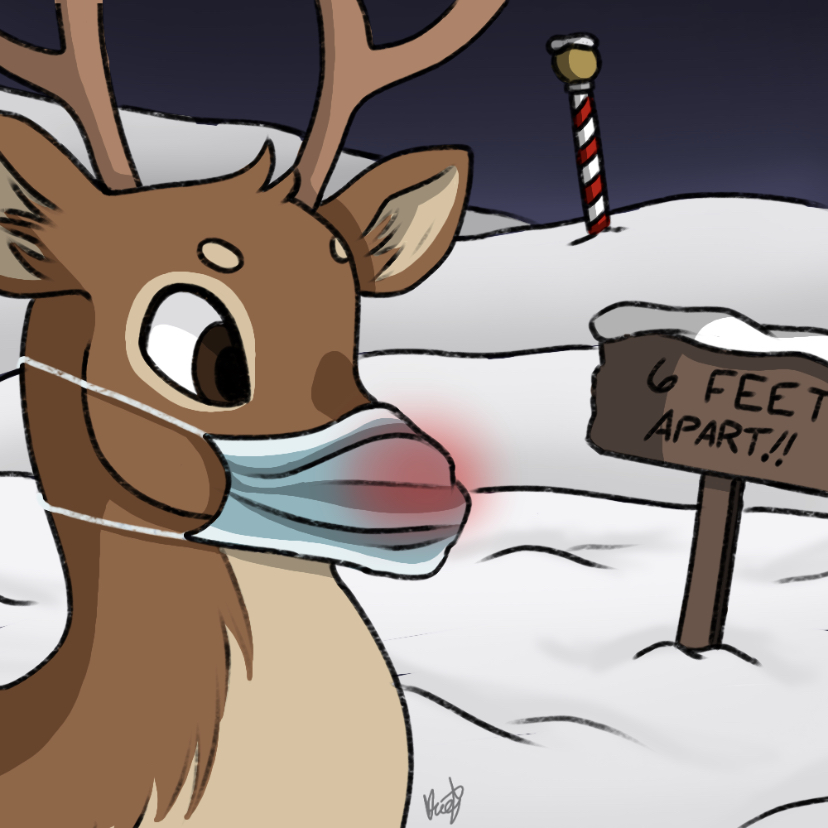 Reindeer will be social distancing, as of Dec. 20 in the North Pole because of apparent lack of regulation up to this point. It has been a stressful year for both humans and animals. Many reindeer have been speaking up about the problems they’re having with their corporation and boss, Nick Claus.

Allegations have come forward stating that Claus has apparently ignored the threat of Covid, as he supposedly said, ”We’re up in the North Pole. How could it even be a problem up here?”

Many reindeer cited the fact that they have to go on many trips into major cities to talk with airlines about the dangers of grandmas and landing strips while trying to work.
Evan M. Dancer, a working reindeer at Santa’s facility, stated: “I like to go out, I like to party. But even I was questioning Mr. Claus’ dismissiveness to the whole pandemic.”
In the middle of this interview, he immediately began break-dancing, then later explained, he was merely ”getting jiggy with it.”
Apparently in an act of kindness, Dasher knitted custom reindeer masks for the team, all in less than an hour.
Reindeer have started going on strike, as a sickly coworker apparently contracted Covid-19 recently.
Rudolph, an important worker, who gives Claus the permit to fly without lights, has had a medical record of being sickly ever since he was a fawn.

“Ever since I was a kid, they never let me play in any reindeer games because of my autoimmune disease,” Rudolph said. “Then one foggy Christmas Eve, Mr. Claus came to me with a good job opportunity. I don’t want to fail him, but I also want my coworkers, my family and me to be safe.”

Claus has been on thin ice as of late, and the reindeer have repeatedly filed complaints. They have taken their own precautions, in making sure stables are spaced apart by the regulated 6 ft.

Most of the reindeer noted that Claus has always been a dedicated man, but he can easily be blinded by his ambitions,
Many are bringing into question whether he should still be running the Christmas business after 197 years. Coming up on the 200th anniversary, his secret workshop has continued operations, and using long-outdated coal to do so. He now contributes much to the global footprint, even though he now also deals in technological toys such as consoles.

Some are scared that Claus will bring back his brother, who is supposedly a ruthless enforcer. He retired after being suspected in six disappearances of the FBI investigating Claus’ workshop, and the assault and battery of three different elves who made their toys incorrectly.

Workers and reindeer alike continue their strikes and calls for action.