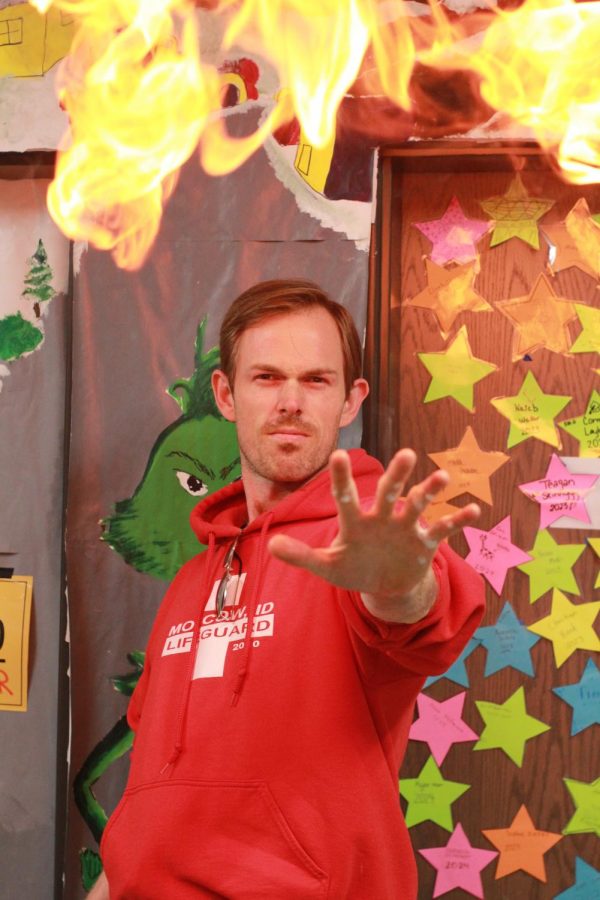 John Schaper lights his soap-covered hand on fire Feb. 2 during an experiment with a class. Photo by Annika Lifvenborg.

John Schaper is a new addition to the LHS science staff. Among others, Schaper recently transferred to LHS after teaching at what are now the local middle schools. At the beginning of the school year he began instructing students here in earth science, chemistry and physics.
Previous to becoming a teacher, Schaper attended the University of Idaho and Lewis-Clark State College. While receiving his undergraduate degree, he explored two possible careers — education and medicine. After graduation, Schaper began work as an X-ray/CT technician. But as time passed, he felt unsatisfied with the work, like he needed to do more.
“I loved the science behind what I was doing, and also really liked the patient education aspect of my job,” Schaper said. “I was kind of at a crossroad between pursuing med school and teaching.”
He completed his education degree at UI. In his early teaching days he had the opportunity to teach courses in anatomy and physiology. As a healthcare professional, those courses were fun to teach, he said.
Schaper’s interest in science began in seventh grade with his history teacher, Mr. Albrect. Schaper had said that Albrecht significantly influenced his love for teaching. Albrecht loved his job and was passionate about the work, Schaper said.
After teaching at local middle schools, Schaper said he enjoys having the opportunity to teach at the high school level.
“It has been great to be a part of the high school team as we have moved into our new building,” Schaper said. “I also really enjoy being able to see my former students.”
During this school year his personal goals have included polishing up materials for his newly introduced science classes.
“Outside of that, my goal as a teacher is to help my students learn more about themselves and discover interests, whether science related or un-science related, as they plan for their futures,” he said.