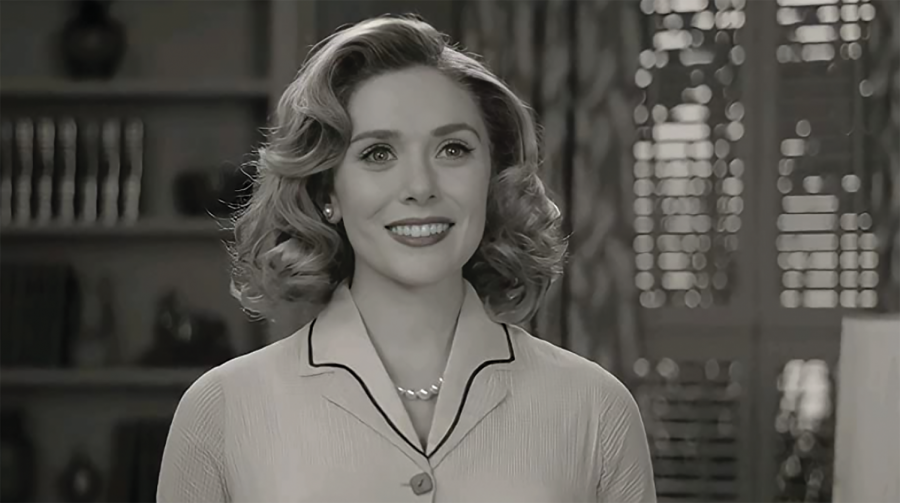 Wanda (Olsen) is welcomed home by her husband Vision (Bettany) as she appears to be in a 50s sitcom.

WARNING! Major and minor spoilers for potentially any Marvel Cinematic Universe film ahead!
The last the world saw of the Marvel Cinematic Universe was in July of 2019 with its release of Spider-Man: Far From Home. Since then, audiences were promised Black Widow in May of 2020, and then November of 2020, and now it is set to release in May of this year, making 2020 the first year since 2009 that a Marvel film has not been released (Thanks, Rona!). Fans of the MCU had a year full of disappointment, but the tables turned with Marvel’s release of the Disney+ exclusive series, WandaVision.
If you haven’t seen a Marvel movie, consider stopping at this point. The show – like all Marvel content – directly ties into the previous films, so you must be caught up in the story to understand it.
It takes place only a few weeks after the events of Avengers: Endgame, where the audience saw Wanda (Elizabeth Olsen) “Blip” back to existence five years after both her and Vision’s (Paul Bettany) deaths. She immediately proceeded to duke it out with Thanos (Josh Brolin), Marvel’s biggest baddie. After Thanos’ defeat, she attended Tony Stark’s (Robert Downey Jr.) funeral, and that’s where the audience last saw her. Now, however, she has taken a whole town hostage with her mind and created an alternate reality where she and Vision live together in what appears to be various sitcoms.
Each episode is styled after a decade of television – the first episode looks like it’s from the 50s, the second from the 60s, and so on. Each episode has its own theme song, also based around whatever decade it’s supposed to be. The audience follows as Vision slowly seems to become aware of what’s going on, all while Wanda explores and pushes the barriers of her increasing power.
The show takes some time to get used to. It’s unlike anything the viewer has ever seen. It’s an odd blend of nostalgia at the style and references, as well as intrigue and curiosity at what’s going on behind the scenes.
It’s also incredibly emotional. Wanda does what she does solely out of grief. Who can blame her? She’s lost her parents, her brother, her friends, her home. The show goes deeper into her emotional struggles and helps the audience see all she’s gone through. It’s heartbreaking and upsetting but so beautifully done.
Nobody expected the show to do as well as it did, but the world was pleasantly surprised at how good it was. The show averaged 91% on Rotten Tomatoes, and three episodes received 100% on the site. Overall, it’s a bittersweet story that serves to connect the audience with Wanda and Vision in a way they’ve never seen before, as well as set up the future of the Marvel Cinematic Universe. This show has the audience looking forward to what the people at Marvel HQ have in store for them and leaves them satisfied with what they saw. There really aren’t any flaws in WandaVision…It earns a 5/5.