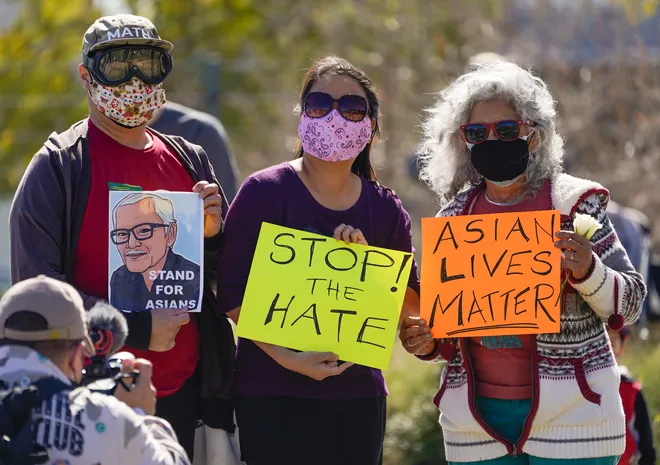 A man holds a picture of late Vichar Ratanpakdee, an 84 year old immagrant from Thailand, who was violently shoved to the ground in a deadly attack in San Francisco. Image courtesy of USA today.

“This individual followed me and attacked with what seemed like a rock in a sock. It hit me in the face, and I fell unconscious. I woke up to find myself suffocating in my own blood in the mask and saw the guy hit my boyfriend in the head and keep charging at us until people around us came to help,” said an Asian high school teacher about an assault on Feb. 25. According to thenewstribune.com, the perpetrator, Sean Holdip, was successfully arrested on Mar. 4 by Seattle Police Department (SPD.) Unfortunately, occurrences like these are on the rise throughout the nation.
Former President Donald Trump began spreading anti-Asian rhetoric in a tweet on Mar. 16, 2020, that said, “The United States will be powerfully supporting those industries, like Airlines and others, that are particularly affected by the Chinese Virus. We will be stronger than ever before!”
He faced immediate backlash from many, ranging from Asian Americans to the Centers for Disease Control and Prevention. The statement encouraged some to partake in similar behaviors and phrases. Trump even coined the term “Kung flu” when referring to COVID-19 to his (smaller than anticipated) audience at a rally in Tulsa, OK, on Jun. 20, 2020.
These phrases are racist, xenophobic, and unacceptable. They further perpetuate the myth that Asian Americans are more likely to spread COVID and are harmful to mental health. It also puts lives on the line.
In a tragic example, 84-year old Vicha Ratanapakdee, a Thai American man, was killed in an unprovoked attack. According to abcnews.com, Ratanapakdee took a morning stroll in his San Francisco neighborhood on Jan. 28, 2021, when he was shoved to the ground by a violent passerby. He died in hospitalization two days later.
¨I want him to stay alive and wake up… and come see me again. But he will never wake up again.¨, said Monthanus Ratanapakdee, Vicha’s daughter.
¨It’s pretty obvious that it’s a racist attack. He (Antoine Watson, the ¨violent passerby¨) looked at a little Asian man and felt that he could take out his anger on him, and it was justified somehow ¨ Eric Lawson, Vicha’s son-in-law said. ¨He ran from all the way across the street downhill and slammed him into the garage, into the floor, and broke his head open.¨
This should make your blood boil. The Stop AAPI (Asian American pacific islander) Hate advocacy group based in California recorded almost 3,000 cases of aggression from Mar. to Dec. 2020. These numbers are considered more accurate than the FBI’s, as some do not report hate crimes to them due to language barriers or mistrust in government officials. Disproportionate amounts of attacks were targeted towards women and the elderly. For comparison, roughly 100 were reported in previous years.
Another problematic misconception Asians face, besides being more likely to spread COVID, is that they do not need help. Many stereotype them as a ¨model minority¨ and are therefore immune to harassment. This is untrue and damaging. It’s not that they aren’t coming forward; they are not being heard.
¨One of the greatest myths out there is that Asians are quiet and don’t say anything. It’s easy for one to say that, but if you speak and no one hears you, the easy excuse is that you never said anything at all.” Said Rep. Tackey Chan, D-Quincy.
Another Asian congressperson, Rep. Grace Meng, D-NY, also spoke on this issue and on feeling invisible. ¨Our people are getting attacked, our people are getting harassed, spat on, beat up, you know, slashed. Please, somebody pay attention, please notice us. Give me confirmation that — I am an American too.¨
Over the summer of 2020, the Black Lives Matter movement gained an incredible following and enacted much-needed change. Racism was at the forefront of many American minds; what happened to Asian-Americans? This may seem like a valid question, but these two groups should not be pitted against each other nor compared. Their historical struggles and stereotypes are separate and individual. Being bitter because one grouping was not in the limelight during a historical movement is foolish and not a far cry from the unrightfully agitated ¨all lives matter¨ and ¨white lives matter” groups.
“White supremacy has always pitted racial groups against one another,” Brad Jenkins, a volunteer for the AAPI coalition, said. “These communities have long fought against violence and hatred while many in the Asian American community have stayed silent in the past. So yes, Asian American leaders do realize that we must find strength in combating this violence — but we also recognize that our African American brothers and sisters deal with this hatred and violence every single day of our lives.”
President Joe Biden denounced Asian hate crimes on Mar. 11, 2021, while giving remarks on a year with COVID during a prime-time address. “At this very moment, so many of them, our fellow Americans, are on the front lines of this pandemic trying to save lives and still — still are forced to live in fear for their lives just walking down streets in America,” he said. “It’s wrong, it’s un-American, and it must stop.”
President Biden signed a memorandum on Jan. 26, 2021, that condemns discrimination negatively impacting the AAPI community due to the pandemic. It issues guidance to the justice system on dealing with the increased racially motivated crimes against Asians. The memorandum is an addition to a series of racial-equity-focused executive orders. It stands as a glimmer of hope for the United States.
Asian hate has been increased to a level many have never seen in their lifetime due to COVID. The despicable words and actions being directed at these people are disheartening and wrong. To continue to be silent on matters like these is harmful compliancy. The unfounded belief that Asians are more likely to spread COVID or aren’t suffering is witless. Asian Americans are being bombarded with resentment, and to contribute to their pain is nothing less than evil.