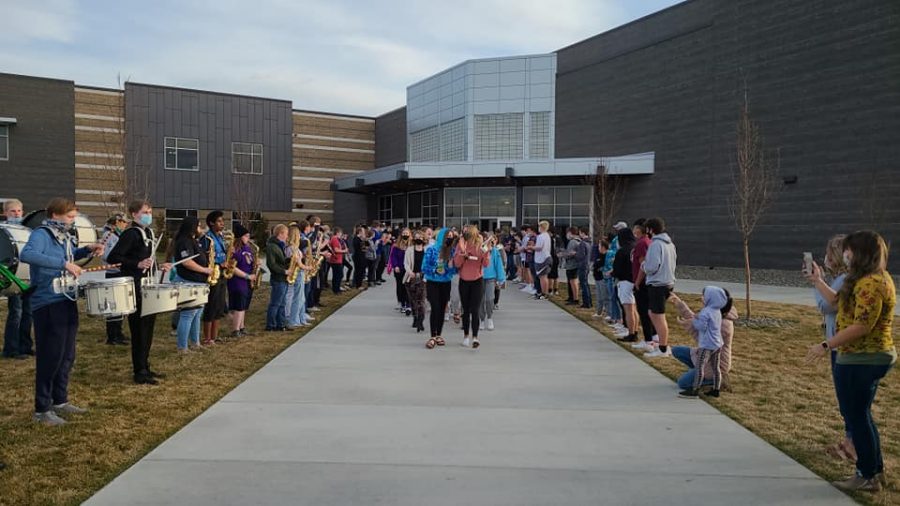 The LHS band and a group of students attend the send-off for the cheer team, as they leave for state. Photo courtesy of Mindy Pals

The LHS varsity cheer team did not earn an award at the state tournament in Nampa Idaho on March 19, 2021. The team placed 6th with their show routine, 6th for pom routine and 5th for sideline Cheer. They competed against other district champion schools from all over the state of Idaho. Their show routine was two and a half minutes long and consisted of stunting, tumbling, dancing, and a cheer. The sideline cheer was a minute long routine consisting of a cheer, tumbling and stunting. The Pom routine was a minute long routine of dancing, jumping and tumbling.

Avery Alford, a freshman cheerleader, said she felt excited before going to state. “Even though I am a little nervous about state, I know that it will be really fun. I’m especially excited about staying overnight with the team. I’m only a freshman, so it’s super cool that I get the opportunity to go to state already. We worked really hard for it.”
Before going to state, the team competed at the district level on Feb. 27 in the Lewiston high school gym. They won 1st in their pom and sideline routine and 3rd in the stunt group routines, winning 1st overall.

Assistant coach Joshua Rodgers said, “It was really awesome to host the state qualifier at our new school. This was a lot of people’s first opportunity to watch any of the schools routines and support their cheerleaders this season. It was really great to have won the competition and show everything we have been working so hard on this year. I think the team did great, and they won! I was proud of how hard everyone worked. They all really worked as a team and got to show off all their hard work from this season.”