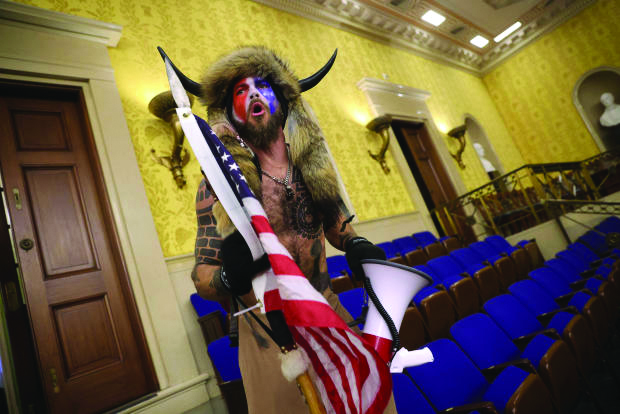 WASHINGTON, DC - JANUARY 06: A protester screams "Freedom" inside the Senate chamber after the U.S. Capitol was breached by a mob during a joint session of Congress on January 06, 2021 in Washington, DC. Congress held a joint session today to ratify President-elect Joe Biden's 306-232 Electoral College win over President Donald Trump. A group of Republican senators said they would reject the Electoral College votes of several states unless Congress appointed a commission to audit the election results. Pro-Trump protesters entered the U.S. Capitol building during demonstrations in the nation's capital. (Photo by Win McNamee/Getty Images)

“And we fight. We fight like hell. And if you don’t fight like hell, you’re not gonna have a country anymore.” said former president Donald Trump on Jan 6, 2021, during his speech on the ellipse. Jan 6, 2021, marks a dark day in American history. Insurrectionists stormed the U.S. Capitol in an attempt to stop the counting of electoral college votes for the 2020 presidential election. Capitol police were verbally and physically abused, and congressional staff hid in barricaded closets and offices as the pro-Trump mob charged through barricades and broken windows. On the first anniversary of this violent attack on American democracy, republican trump-supporters wrongfully minimized the magnitude of the failed insurrection.

At noon on Jan 6, 2021, Trump addressed the protestors at the white house, saying things like “we will never give up,” “we will never concede,” and even “We’re going to the Capitol… We’re going to try and give them [Republicans] the kind of pride and boldness that they need to take back our country.” He ends his remarks shortly after one pm. By 1:30, capitol police were overwhelmed by rioters attempting to enter the Capitol to stop the electoral college count within the building. According to npr.org, shortly after two pm, capitol rioters broke through the windows, entered the Capitol, and began to open doors. Shouts of “fight for Trump!” and “hang Pence!” filled the halls of the Capitol. After 3 pm, rioters reached the senate floor, rifled through papers, and broke into congressional offices. Almost five hours after the rioting began, capitol police secured the Capitol’s interior around 6 pm.

According to the United States Justice Department, the attack caused approximately $1,500,000 of damage to the Capitol. At least 140 police officers were assaulted, and more than 725 arrests have been issued as of Dec 30, 2021. The Federal Burea of Investigation (FBI) is still on the hunt for the person(s) who planted pipe bombs outside the Republican and Democratic National Committees the previous night. Five people died during or shortly after the riot, including four rioters and one police officer. Four police officers protecting the Capitol would later die by suicide in the following months, directly correlated to the trauma they took on.

Despite all this, many republicans in congress are walking back on their previous statements or seem to have had a change of heart. Take Mitch McConnell (Senate minority leader), for example. He sharply condemned Donald Trump in an address the same day.

“There’s no question – none – that President Trump is practically and morally responsible for provoking the events of the day. No question about it.” And would go on to call Trump’s seeming inability to do anything about the violence he incited a “disgraceful, disgraceful dereliction of duty” and would label the rioters as criminals.

On the first anniversary, McConnell still expressed his discontent with the attempt to kill democracy but would go on to demonize democrats for their politicization of the event as they “try to exploit (the) anniversary to advance partisan policy goals that have long predated this event.” Whether he is correct or not, there’s no denying that he’s diverting pressure off of his fellow Republicans.

Other GOP congressional members who deflected responsibility include South Carolina Sen. Lindsey Graham and Florida Gov. Ron DeSantis. Graham pivoted his remarks on the tragedy to President Joe Biden’s and Vice President Kamala Harris’s speeches at the Capitol, summarizing them as an “effort to resurrect a failed presidency.” DeSantis was also quick to bash Democrats and the media rather than the former president. “They (Democrats) are going to take this and milk this for anything they could to…smear anyone who ever supported Donald Trump,” said DeSantis.

It’s incredibly disappointing to see congress members unable to join each other, regardless of party, in remembrance of a dark day for our country and democracy at large. It’s even worse when they take pride in it.

“We’re ashamed of nothing. We’re proud of the work that we did on Jan 6 to make legitimate arguments about election integrity,” said Florida Rep. Matt Gaetz.

The “work” in question was violently storming the Capitol because a politically inexperienced man became president, and his power trip was ending. Later, Gaetz would claim that the federal government orchestrated the insurrection to make Trump’s supporters look bad. (incongruent with literally any findings/research of Jan 6, 2021.) Gaetz also spent the one-year anniversary of the event spouting false conspiracies with Georgia Rep. Marjorie Taylor Greene.

These “legitimate” problems that Republicans found with the 2020 presidential election have proven untrue on multiple accounts. According to the Associated Press, Biden earned 306 electoral votes to Trump’s 232, which is the same margin that Hillary Clinton lost to Trump in 2016. Back then, Trump claimed it was a “landslide,” but now he wants a re-do for the “narrowly lost” election. The former president also expressed concerns with Biden gaining more votes than Barack Obama did in 2008. This happened due to a larger turnout of registered voters.

There were only two representatives from the Republican party who attended the anniversary on Capitol Hill. The two outliers included Wyoming Rep. Liz Cheney and her father Dick Cheney (vice president for George W Bush.) They were on the house floor for a moment of silence to commemorate the capitol siege and the officers on the front lines.

“…Some people believe that what happened wasn’t that bad…Well, they need to come to talk to me. I’ll show them my injuries. I’ll show them who I was fighting with because these people were not pacifists. These people were intent on overthrowing the government.” said Sgt. Aquilino Gonell, a police officer who was protecting the Capitol.

Gonell is still unable to lift his left arm due to injuries he sustained from the attack. Anytime there are loud noises outside the Capitol, especially construction, it takes him back to Jan 6, 2021. He is still in recovery for his shoulder and psychological wounds over a year later.

Many trump-supporters believe in the “Blue Lives Matter” movement, a call for support of police officers, and the conviction of those who harm officers. It is hypocritical to say you believe that blue lives matter and then join an angry mob that attacks over 140 police officers. It proves that conservatives like police until they’re the ones being policed, and blue lives have never really mattered to them.

It’s hard to see the lack of responsibility or remorse from those of the Republican party, especially from Donald Trump, the one who incited the violence. It’s wrong to deflect the magnitude of the capital siege by saying they were proud and that democrats have politicized it. The attack happened due to political qualms. The anniversary should have been a day to remember and reflect on the attack and to implement changes to prevent the threat of losing democracy. Instead, fingers were pointed, and the Republican party spun ridiculous conspiracies.