The Bengal's Purr • May 9, 2022 • https://bengalspurr.com/9338/entertainment/marry-me-proves-cheesy-films-can-be-satisfactory/

“Marry Me” proves cheesy films can be satisfactory 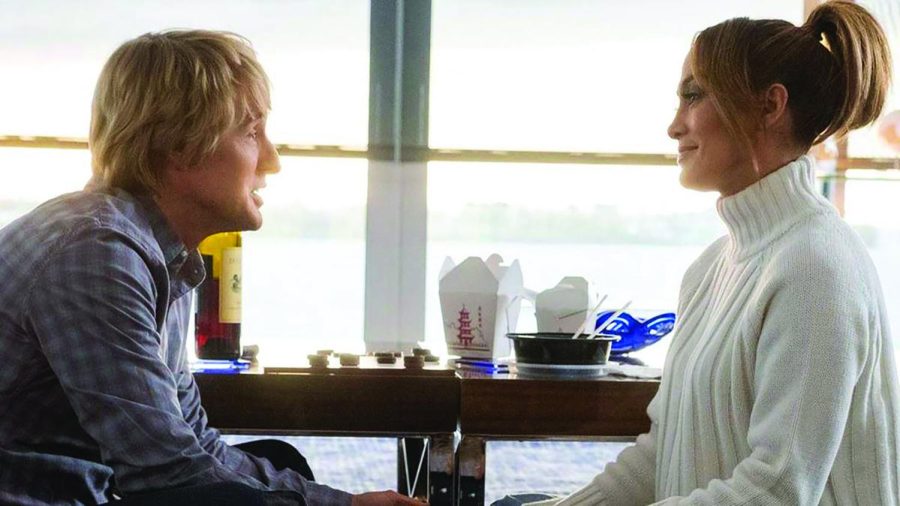 The rom-com, Marry Me, hit theaters Feb. 11 and is available to stream on Peacock. Directed by Kat Corio, the film is about two music superstars, Kat Valdez (Jennifer Lopez) and Bastain (Maluma), who are engaged and about to marry each other with fans watching. However, right before the wedding, Valdez learns that her fiance has been cheating on her. While she is on stage, she has a meltdown. During her meltdown, she meets the eyes of a total stranger named Charlie Gilbert (Owen Wilson), a man in the crowd holding his friend’s sign that says “Marry Me.” She decides to marry him, instead.
The morning after, she decides to stay married for six months, curious if love will develop. Charlie invites her to chaperone at a school dance, and the two share their first real kiss. When everything seems perfect, Bastain wants Kat to perform their hit song “Marry Me” together because it was nominated for a Grammy. Charlie gets jealous of the connection between them and breaks up with Kat. In classic romantic comedy fashion, Kat takes a plane to Charlie’s math team competition and holds up a sign that says “Marry Me,” just like in the beginning of the movie.
The film is filled with many rom-com movie tropes including a last minute plan to win someone back and slow dancing alone together at night. Most of it feels cheesy and uncomfortable. Wilson and Lopez are definitely not the pair one would expect to play the lead couple in a romantic movie. Lopez does amazing work with her part, and Wilson brings comedy into the movie with his one-liners. It is supposed to be an “opposites attract” type of story, where the girlfriend is gorgeous while the boyfriend is unattractive. But the two of them together just feel out of place. Despite this, there are many cute moments with Charlie, his daughter, and with Kat learning to do things on her own.
The ending is very rushed and comes right when Kat goes to the competition. The film doesn’t have a good balance of romance and comedy. There are also too many not-so-subtle social media references that feel very forced.
Overall, the film is cute and cheesy like these movies are supposed to be. The film has a run time of one hour and 52 minutes, which is a perfect time. Rotten Tomatoes gave it a 58% and IMDb gave it a 6.2/10. The film shows that fame and fortune cannot buy true love. This is why it deserves a 3/5.