Sonic the Hedgehog 2 hits theaters with a BOOM 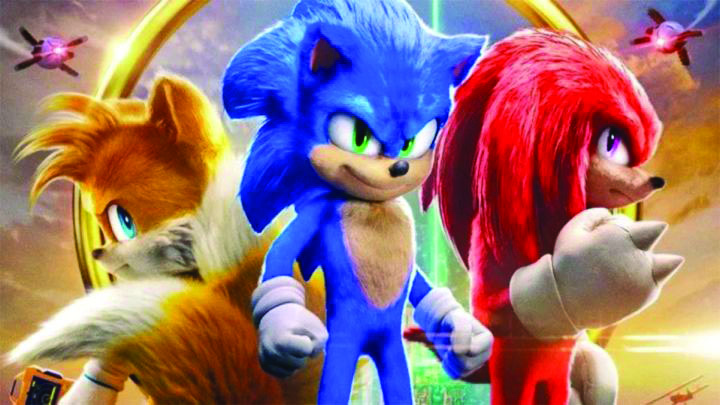 The sequel to Sonic the Hedgehog, Sonic the Hedgehog 2, was released on April 8, and it did not disappoint.
The sequel follows Sonic and his quest to make himself a true hero. He feels as though his reckless behavior balances out that he is stopping crime. He gets the opportunity to test his hero abilities when Dr. Robotnik returns from the mushroom planet. He is accompanied by Sonic’s echidna counterpart, Knuckles, who is determined to find the emerald that his tribe once lost.
Knuckles grew up as a soldier in his echidna tribe, the Knuckles’ Clan, who sought to protect the emerald. Their tribe had been in a decades-long war with a rival echidna tribe as they wanted the immense power that the emerald held. The master emerald balances the energies created by the seven Chaos Emeralds. Sonic has heard of the master emerald but thinks of it only as a folk-tale; he doesn’t believe it exists. That causes a lot of confusion for Sonic as to why Knuckles is coming after him. Knuckles doesn’t know that Dr. Robotnik wants the power of the emerald for himself, willing to go behind Knuckles’ back to retain that power.
In all, this movie was rather amusing. The childish aspects of the film and the plot pacing were enjoyable. Although this movie was an astounding two hours long -which is pretty long for a kids’ movie- there were never any moments where one feels bored. They didn’t linger too long on any parts, nor did they leave any plot points unexplained, like the Knuckles’ Clan history. I would recommend this movie to friends, and all of the people I watched this movie with enjoyed it just as I did. I give this movie a 5/5.

Despite this movie being a children’s movie, one couldn’t help but be entertained by it. It was a great movie to watch with friends and was thoroughly enjoyable. The film was paced pretty well and was engaging the whole movie. There was a lot of dumb humor, but it’s a kid’s movie; one can’t expect anything less. I personally could only think of marking it down for using Uptown Funk by Bruno Mars in the dance battle scene because of my personal vendetta against that song. But, the dance battle scene was entertaining nonetheless. Ultimately, there are no substantial complaints about this movie and is a movie to go see.