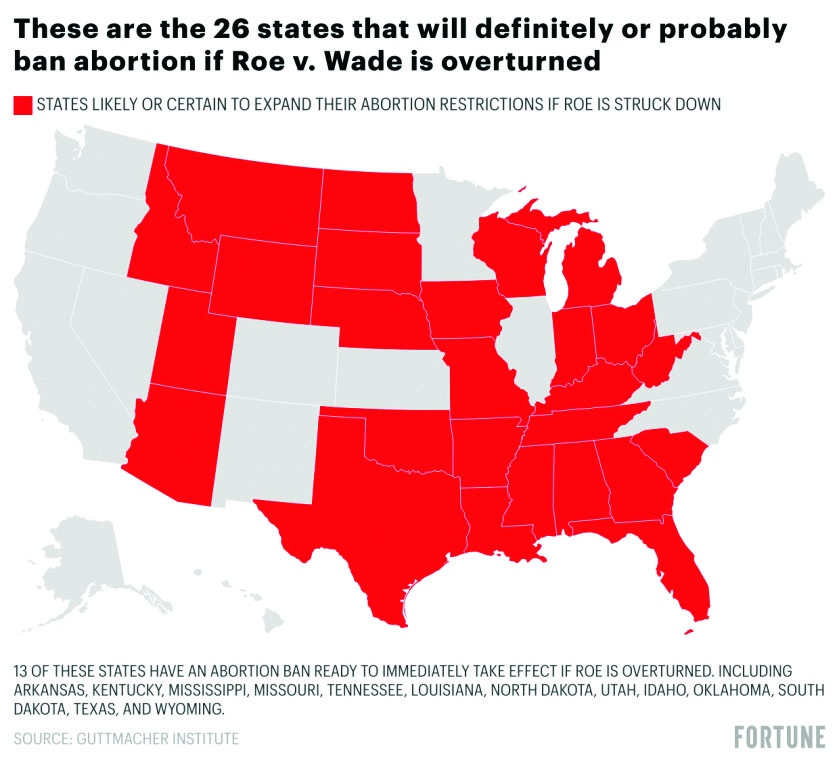 On Jan.22, 1973, the Supreme Court of the United States (SCOTUS) issued a ruling in favor of “Jane Roe” (Norma McCorvey) which stated that all women in the U.S. maintain the right to choose whether to have an abortion without government restriction.

Since then, the ruling has been held up, guaranteeing women the right to an abortion on a federal level. However, on May 3, a draft of a SCOTUS opinion was leaked, which would overturn the ruling and throw out the fundamental right of U.S. citizens to receive abortions, leaving the issue to be determined state-by-state. Supreme Court Justice John Roberts has confirmed the leak’s authenticity, but he noted that the draft is not final and does not necessarily represent the court’s ruling.

This leak has come on the heels of the controversy surrounding a Texas law that makes women ineligible for an abortion once the fetus’s heartbeat can be detected, or at about six weeks. The controversy stems from the fact that pregnancy is not usually noticeable without an ultrasound or MRI scan until approximately 16-20 weeks, according to webmd.com, or perhaps as early as 12 weeks, according to healthline.com. Either way, Texas’ law necessitates that women preemptively check to see if they are pregnant, potentially wasting their own time and money in the event of no pregnancy, in order to undergo an abortion and avoid having a child.

Already, Texas lawmakers are overstepping boundaries and fabricating loopholes within Roe v. Wade to withhold women’s right to receive abortions. Still, if Roe v. Wade were overturned, abortions in Texas would be banned altogether. According to the New York Times, there are another 25 states that are guaranteed or very likely to ban them as well, including Idaho, fittingly dividing the country in two.

U.S. President Joe Biden commented on the leak on May 10, stating, “It’s not just the brutality of taking away a woman’s right to her body… but it also… basically says there’s no such thing as the right to privacy.” He went on to predict that if the SCOTUS overturns Roe v. Wade, “They (Republican officials) are going to go after the Supreme Court decision on same-sex marriage” and Griswold v. Connecticut, which protects the right of U.S. citizens to purchase and use contraceptives. The latter is foremost in the minds of experts, according to NBC. The wording of the draft is vague enough that it could allow conservatives to target contraception. Idaho, Louisiana, and several other states are already considering legislation to limit the types of birth control that non-married residents can acquire. Catherine Cohen, a scholar of law and policy at the UCLA Law Center, said that contraception methods such as Plan B and some types of intrauterine devices (IUDs) could be restricted under Louisiana’s planned legislation.

According to the Texas Tribune, the state of Texas is pursuing administering the death penalty as punishment for receiving an abortion, which is completely counter to the pro-life platform of Texas officials preserving human life. If this bill, which is not the first of its kind to be proposed in the state, were to pass, it would put on full display the hypocrisy of pro-life government officials.